I’m curious, has anyone here ever been asked to design a grave marker (headstone, tombstone)? My wife designed one for her parents who died a few months apart, but I’ve never encountered any other designer mentioning it.

I wonder if a market exists for custom gravestone designs. I’ve seen plenty of headstones with less-than-great typography and various clip art scenes supplied by the gravestone company, but a clean, cool, well-designed, and unique marker seems a rarity.

As a graphic designer with a particular interest in typography, I’d really hate to be buried forever under a gravestone with bad kerning.

I know crowdsourcing people are watching us. Don’t give them ideas.

I’d really hate to be buried forever under a gravestone with bad kerning.

I wonder if a market exists for custom gravestone designs.

Doing rubbings of gravestones was a victorian era hobby. I would want something far out and was suitable for rubbings… something that would make my grave a tourist destination.

Did you say bed keming?

I once did an inscription for a friends father. I had to add his name to the already full wrought iron sign of the family grave. The deceased was a graphics designer and did the graves typography before me.

I found the font and recreated the sign with all the names and dates to make some space. The original kerning was done very well by hand. I mimicked his style down to the last detail to ad his name. In the process I actually learned some from him after his death.

That’s one thing I’ve never been asked to do. Since I want to be cremated, I’m not too worried about resting eternally under bad type.

I might have posted this before, but this gravestone is close to my parent’s grave in my hometown.

“Big Daddy” Ed Roth was a celebrity in the 1960’s hotrod and Rat Fink craze. Each June, there’s a Rat Fink Reunion in the town. Hundreds of people show up in custom hotrods and put pennies on his grave.

The gravestone has his logotype, and I’ve always wondered if he designed the gravestone himself. One of these times, I’ll go to the Rat Fink festival and ask somebody. 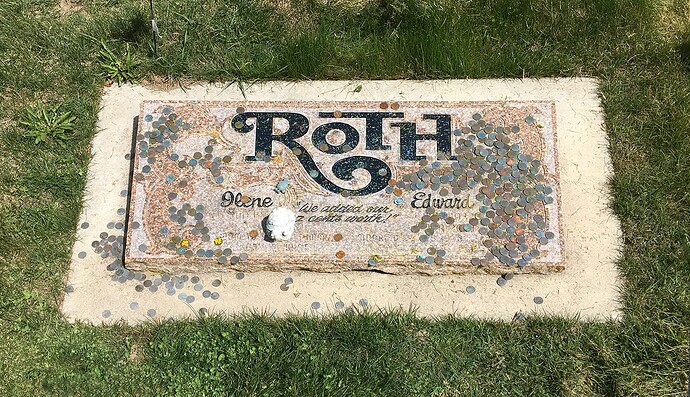 I’ve never heard of anyone designing headstones as their job or side hustle. The Masons at the Memorial companies handle all of it. That being said, people sort of ‘‘design’’ their own all the time and take it to the business to reproduce. Our locals carvers do beautiful work. I’ve seen some pretty intricate photo reproductions and wildlife scenes.

And I am sitting here not wearing my Rat Fink shirt! I’ll have to wear it tomorrow.

I’d really hate to be buried forever under a gravestone with bad kerning.

For exactly that reason, I want to design my own – one day before I slip off this mortal coil. My two ideas of eternal hell are bad kerning and having a park bench with a little dedication plaque. Is that a thing over there? Here it is and I find it miserable. I know most people see it as quite sweet, but for me, if that is the sum total of my life, kill me now and sit on me!

Also, I find modern headstones usually come from the cookie-cutter, MS Word school of design. Almost everything from 1950s onwards seems to be pretty terrible. Conversely, in our local churchyard, there are headstones going back as far as the fifteenth century ( I think there may even be a few even earlier). Some of the lettering is breathtakingly beautiful and the kerning doesn’t miss a beat. There are two in particular, which, when I get the time – and after I finish my ten-years-in-the-making current three typefaces – I really want to turn into fonts (and then full families). They really are stunning. How did that level of skill disappear as the standard level and become so ‘mechanically’ poor?

In reality I think I want to be cremated, but it is almost worth being buried just to have an irreverent headstone for all eternity.

A friend of mind researched his family history a few years back and, surprisingly, found out one branch of his family was from Florida, so he went over on holiday to see the family graveyard. Found one relative’s headstone and I t said, simply, ‘At least I know where he’s sleeping tonight.’

That really is the best example I’ve ever heard of, of revenge being best served cold. Love it. I’d have married the widow just for that one act of genius.

No headstone for me. I want to be cremated and scattered some place lovely. Maybe on top of the Mountain where my Dad worked as a NYS Fire Observer for years. We had many happy family times up there during my childhood. It was serene and I always felt close to the heavens - if you will

And that’s coming from someone who is not religious

I told my wife I don’t want to be buried amongst others and have her come to my grave every so often to look at a morbid row of stones and next to some random.

I told her, cremation, scatter some place beautiful - and if she wants to come visit me, come there on a holiday, remember me, have a good time, look at the nice views.

The weird thing about it is, I have a fascination with graveyards, I like visiting them when I am on holidays, looking at the headstones, finding the oldest one there and so on.

But I don’t want to be buried in one.

I’d like a holiday destination, and if people want to visit me, take a holiday, and come, look at the views, have fun.

The weird thing about it is, I have a fascination with graveyards
.
.
.
But I don’t want to be buried in one.

My two ideas of eternal hell are bad kerning and having a park bench with a little dedication plaque. Is that a thing over there?

Oh, yeah. It’s a thing over here. After 10 or 15 years, the brass plaque usually begins to corrode. This happens about the time the seat on the bench either breaks or separates from its supports. There’s usually no maintenance, and eventually, the bench disappears — likely when the cemetery sextons tire of it and haul it off.

A new thing I’ve noticed are color photos of the deceased that were somehow embedded into the stone. I’m not up on my cemetery technology, so I don’t know how that’s done. However, I’d be willing to bet that after 15 years in the sun, they’ll look more faded than a 1970s Polaroid.

I’m sure there’s more to it than that - but that’s my general ignorant understanding of it. 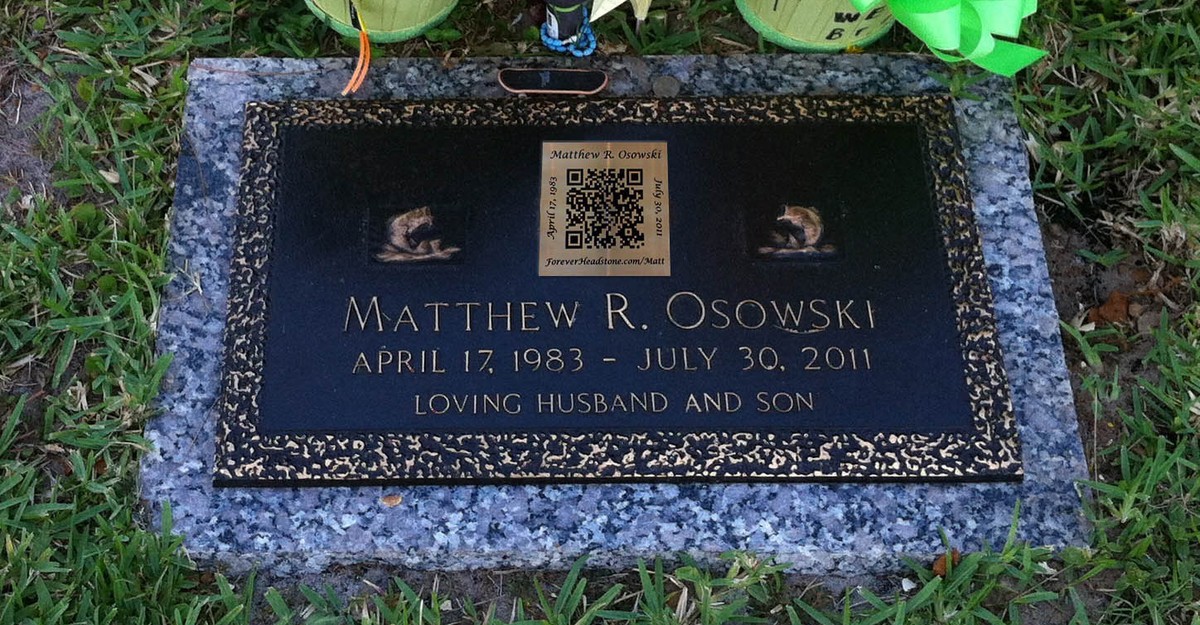 Would You Get a QR Code on Your Gravestone?

Graveyards are becoming smart spaces, but will today's technology last for eternity?

Ha! I just checked the QR code in the photo from my phone. It heads to a 404 error. So much for headstone internet technology.

I’ve seen them recently and the colored etching is not guaranteed at all. It’s cool looking, but I doubt they would last for decades … probably a couple years at best depending on weather conditions. There is a new product out on the market today, this is adding color to traditional black and white etched designs on headstones.

Probably had to take it down after it posted publically

That is genius. You would have to make sure the link never expires though, which might require some active management down the line.

I designed the additions to my dad’s gravestone when my mum died. I matched the typeface and PhotoShopped a mock up of how it should look with the additions. The stone mason was grateful for such clear specifications and the finished result was just like my mockup.

A new thing I’ve noticed are color photos of the deceased that were somehow embedded into the stone.

That has been a thing in Italy forever – well maybe not before the advent of photography! People don’t always get buried. Often, they get put in people-sized marble filing cabinet things, then eventually, they get moved to smaller ones. They usually have photos or illustrations on (I think in enamel, so they don’t fade). Like this.

I have mixed feelings about the whole burial thing. In that, sometimes it is nice to go to the place where generations of my family are buried, but by choosing to be buried, you end up leaving a responsibility for other people. Cremated and scattered is far more considerate.

Equally, I do love wandering around the churchyard where I live and getting glimpses into people who lived centuries ago. There is something oddly comforting about it all.

On the photos thing, a lot of those are awful dye sub on porcelain tiles. They do fade within 10 years to nothing. I’ve been watching one on a tombstone next to my parents’ grave. Next time I’m over there, I take a photo of it. It’s pretty horrible.

If you want to do that process correctly, it has to be true porcelain - glass on steel and sealed properly so the steel doesn’t corrode too fast. We do these as graphic panels for tough environments and in theory they should last up to 40 years. If the steel doesn’t rust out at the bolt holes

There’s another process that embeds an image into the anodized layer of aluminum. That’ll last until the anodizing layer erodes. I’ve done a few graphic panels that way, a long time ago. They were only warrantied for 10 years. Same with high pressure phenolic panels, though some of those I’ve done have lasted as long as 15 years.
And the last one is image embedded in powdercoat on aluminum. Again only warrantied for 10 years in a normal environment (ie not full sun on a sandy beach in the northeast, LOL.) Any of those will beat that Harriet Carter catalog porcelain photo though. Except on price tag. Spendy.

Conjecture on what happened to the type. Around the 1950s, rudimentary stenciling machines became available, with limited font selection, but sure made engraving by sandblasting so easy, anyone could do it. Then came the rubberized blast masks (think really thick ruby lith) and then came the more sophisticated vinyl plotters to cut it. We used to do a lot of glass sandblasting with this stuff, now we only use it for simple designs and text. There is a photo emulsion blast mask now that can do really scary intricate design and we use that a lot.

IOW, everything become machine-cookie-cutter lettering long enough for the skilled craftsmen to die and no one does hand lettering any more. Not in stone. There are still a few wood sign carvers around, but man, I haven’t talked to the last guy we used for a job in over a decade. Like our neon guys, they were all really old a decade ago.

A lot of the metal sign industry is now cookie cutter too. There used to be guys out there that were pros at oxidation and pickling and all the various chemical treatments you could do to metals to get some really great looks. Now it’s paint or clear coat. The bas relief designs are farmed out to China, the lettering is manufactured in China, Mexico or the Philipines, rarely the US, though still a few around. It’s all dying.

I considered donating my dead shell to science but I fear not much will be left of it when I go. Cremation and tossed to the wind works. Just…check the wind direction first.