Wishing a very Happy Easter to all who celebrate! 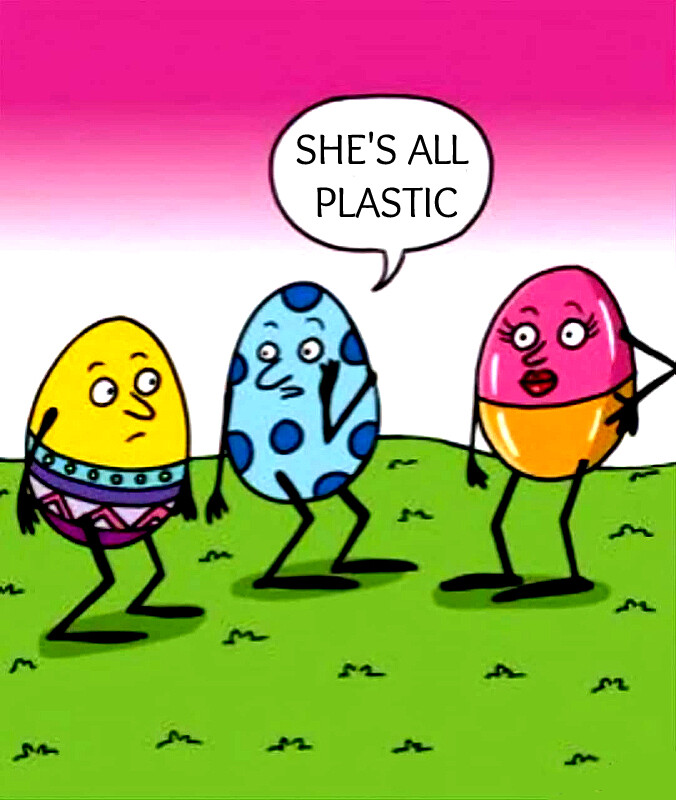 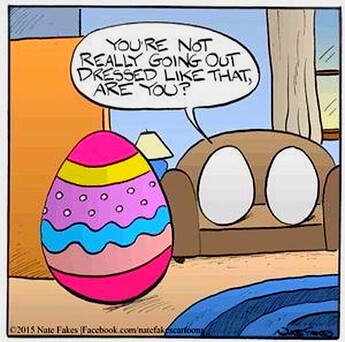 I haven’t celebrated in years since all “my” little ones are grown and doing their own thing now. Big family gatherings are getting farther and farther apart. But, I have a nice ham that I will glaze with apricot sauce, sweet potatoes and other veggies. Haven’t decided on a dessert yet. We don’t do a lot of desserts anymore either. So that will be something simple. Maybe a couple little parfaits

What’s on everyone else’s menu?

No idea for food yet

Wishing a very Happy Easter to all who celebrate!

If you celebrate Easter with bunnies and eggs, that’s harking back to the fertility symbols used in the pagan feast of Ēostre. Even the Hot Cross Buns we are planning to have toasted on Sunday morning date from pre-christian times. I know christians who are celebrating the resurrection, and atheists who are celebrating the Spring equinox. I don’t actually know any pagans, but the traditions are very definitely still with us. 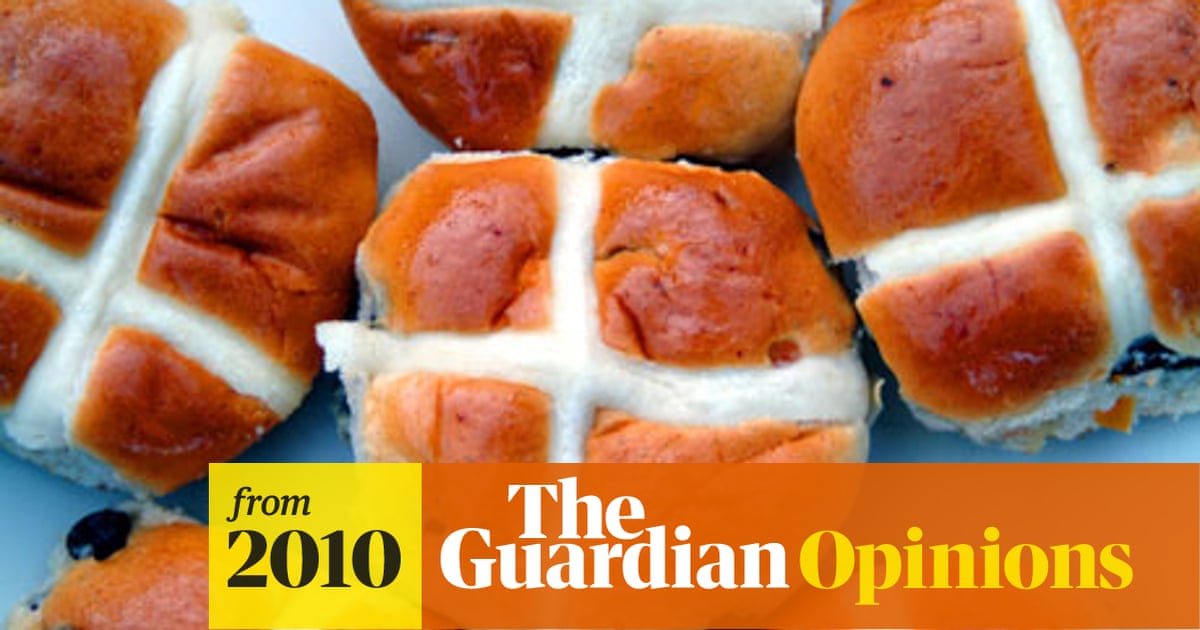 Heather McDougall: From Ishtar to Eostre, the roots of the resurrection story go deep. We should embrace the pagan symbolism of Easter

Very interesting! Thanks for sharing.

We don’t follow any particular religion. We’ll join in and spend time with family for Christmas and Thanksgiving but even during those I feel we’re all there for the young kids, not religion, and food.

Not for Easter but just because we’ll be near a Hannaford my husband wants to buy a plain Hannaford cheesecake. It’s his absolute favorite cheesecake lol.

I’m just in it for the Brach’s Spiced Jelly Beans.

If someone showed up at my house in a bunny outfit, I’m running to my garage to get a large metal garden tool and calling the cops.

I’m realizing my reaction is probably very ‘New York’ of me.

Not at all. Easter bunny costumes are creepy. 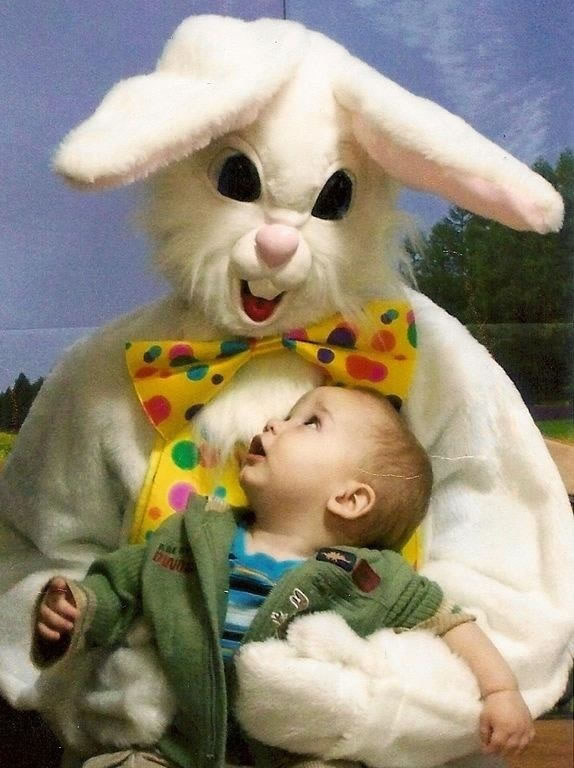 One of my fav movies 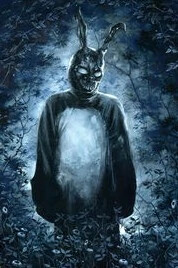 I’ve never seen a happy baby with any “Fairytale” character

But after seeing all this, I seriously need to up my Bunny game for Easter next year 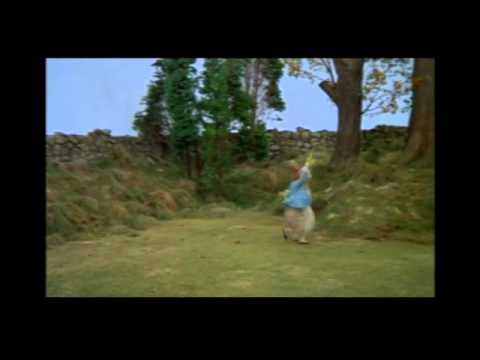 I believe that is Alexander Grant from the 1971 film “Tales of Beatrix Potter”.

I watched that whole thing, kinda secretly waiting for the faux death of rabbit. Nothing sucks more than getting within a few days of harvest only to be poached by some rodent.
Of course Beatrix Potter would never do such a thing.

I used to love seeing an occasional cottontail rabbit until we moved into our house. Nothing is safe from the damned things. Hordes of the furry rodents show up throughout the summer digging up tulip bulbs, destroying the garden, and nibbling away at the lawn until big patches of dirt outnumber what’s left of the grass.

We don’t have many around here … which is odd since it rural. I think the other animals tend to keep the population low.

I would have thought those Rattlers’ would be having nightly Hasenpfeffer.

I suspect the rattlesnakes do feast on young cottontails, however, as big of a nuisance as the rabbits can be, I’d gladly take more of them in exchange for fewer rattlesnakes. We’ll be seeing the first rattlers in our yard during the third or fourth week of May. From then until the end of June, our yard is a dangerous place, then only a little less so until the end of September. We have Rosie (

) scheduled for a rattlesnake vaccination this next Monday.

I hope she doesn’t want to tangle with them

Nothing is safe from the damned things. Hordes of the furry rodents show up throughout the summer digging up tulip bulbs, destroying the garden, and nibbling away at the lawn until big patches of dirt outnumber what’s left of the grass.

Where we used to live, once a year the wild boar would come down the mountain en-masse heading for lower, warmer climes for winter. This coincided with the grape harvest if you were very unlucky. Two years on the run, I was very unlucky. They had my entire grape harvest. Every grape on every vine over four terraces in one night. A year’s work annihilated in one sitting.

Mind, I wasn’t going to argue with them. ‘Nope, I didn’t want the grapes anyway!!’

Don’t know how you live with rattlesnakes though. Do they ever come in the house?

There were vipers around us, but I only ever saw one. Thankfully they are shy creatures and very sensitive to vibration, so they are usually long gone before you get near enough to see them. We had loads of huge bird-eating snakes though. Harmless, but impressive. The scariest thing though was not the vipers, or the boar, or even the scorpions. We had Jurassic hornets. Huge things. Three stings from them had you in hospital.

I quite like old Blighty for not having anything like that. Scariest fauna around here is a slightly annoyed sheep stomping the ground as you pass!

Don’t know how you live with rattlesnakes though. Do they ever come in the house?

The rattlesnakes we have here are pit vipers (Great Basin Rattlesnakes) that don’t retreat. They remain very still until they feel threatened. When that happens, they instantly coil up into a striking position and begin to rattle.

There have been times, I’ve stepped right over them and not noticed because they’re so well camouflaged. Other times, they’ll begin to rattle and threaten to strike if we get within 20 feet. They’re a little bit unpredictable.

I’ve attached a photo of one at our house from a couple of years ago. 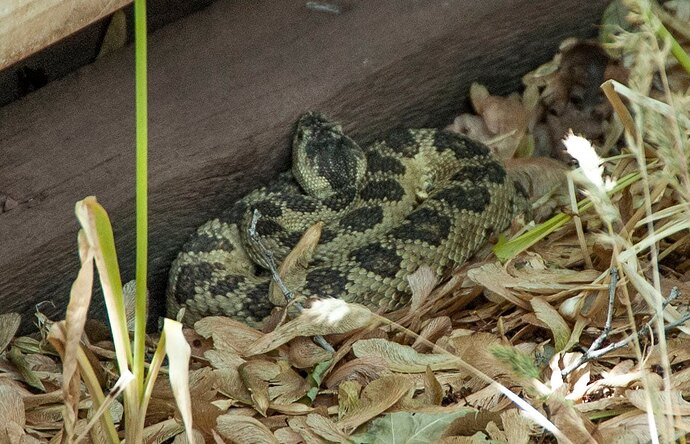 Other harmless snakes (green racers and gopher snakes) have gotten into the house, but so far no rattlers.

I have a biologist friend who studies reptiles. He’s been bitten three times. One of those times, he was driving along a rural highway and noticed a smashed rattler on the road. Driving back several hours later on that same road, the snake was still there, but even flatter than before.

He stopped to get a better look, then reached down to peel it off the road. As he grabbed the supposedly dead snake behind its head, it flipped back and sunk its fangs into his thumb. He instinctively jerked away flinging the snake into the air. It landed on his shoulder and bit him again. Within ten minutes he was unconscious and nearly unable to breathe. The other biologist he was with knew what to do and immediately raced him to the nearest hospital.

We wouldn’t have bought the house if we knew a large snake den was in the bedrock on the hillside above the house. It wasn’t until the following spring that the problem showed up.