Hey all! Hoping to get your opinion on some logos I’ve made. I’ve been feeling a little stuck/not sure where to go with them so any feedback is ideal.

Some background: I am the current head of Social Committee at Princeton University. Twice a year, we run a music festival on campus called Lawnparties. It has a ‘preppy’ theme so pastels and bright colors are generally worn. It’s a day time festival, going from 12PM – 5PM and it happens the week before classes in the fall and after classes end in spring.

I was really excited to rebrand it when I became in charge of it starting this spring, but of course all major parties/festivals/events/socialization-in-general got cancelled so it felt kind of unnecessary? Anyway, I’m trying to beef up my portfolio so I decided to rebrand it anyway. I’m trying to make it ‘brighter’ and ‘lighter’ because I think the former logo didn’t really represent the festival well. Anyway, here are some really rough logos (also, know that the mascot for the school is tigers and the school color is orange). I also created a graphic for posters possibly, I would like to know if there is any part of the tiger graphic that I could possibly incorporate into a logo (I know, it’s way too complicated for a logo but I’m wondering if you think the shapes/color palette/or anything could be incorporated).

Anyway, I’m fairly new to graphic design but I am very ready for you all to tear my logos to shreds. Truly, any critique is super welcome. 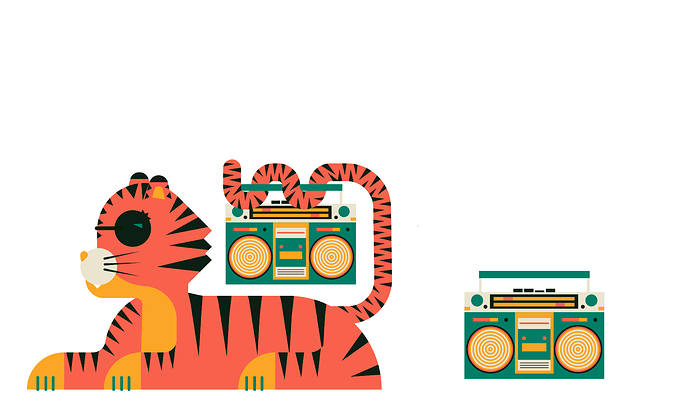 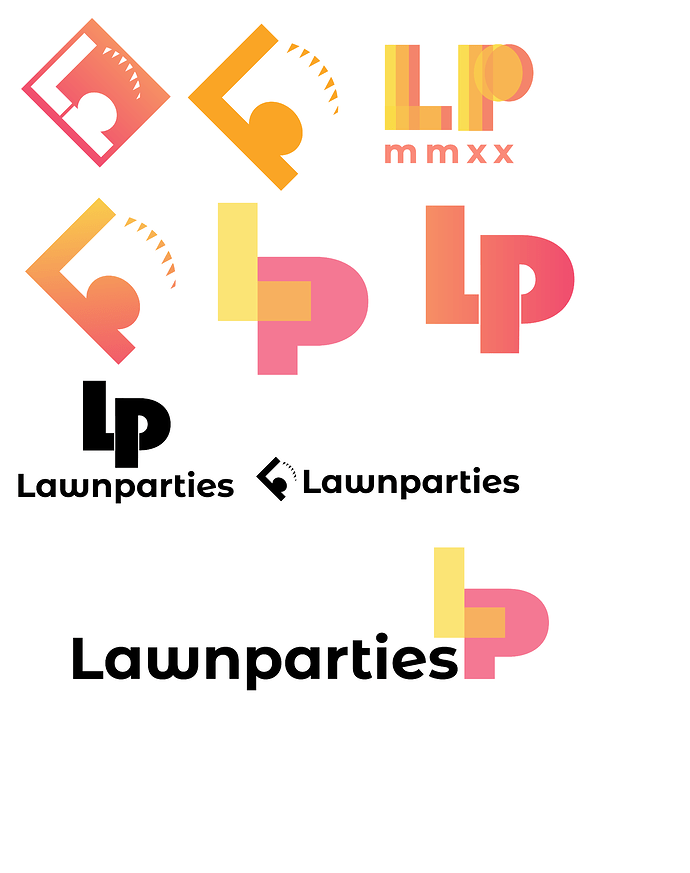 Greetings and welcome to the forum,

It looks like you know something about graphic design but in other aspects most of the logos fall short.
I’m partial to the 6th LP, but id add some text and or year below it. Thicken up the internal strokes where the line comes down.

THe Tiger graphic is cute but also slightly scary. Not akin to a mascot RARA GetEmTeam way. The Jukebox is cool, and easily identifiable with music but college parties…not sure kids are using that to represent sound. It has a unique color scheme and id stick to that.

in terms of font…I understand it but I’d play with something that looks more fun. It has some curves but looks pretty sterile like i’m going to party at “Weekend at Bernies”

Thanks so much for your feedback! I agree with most of what you’ve said and, at least with the logo, have tried to incorporate some of your suggestions. I also agree that the logos were weak, I came up with a whole bunch. I wondering if these are any better (the middle one isn’t finished, but I put it here for the shape)?

For the font, I tried out a bunch of options. I also made everything black so I could focus on the shapes but I’m not entirely sure which font direction I should go with. 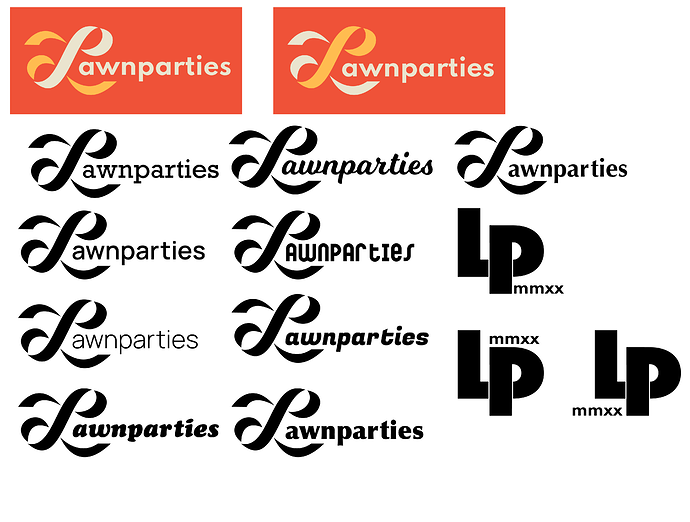 I like the general style of the tiger, but I’m not sure what’s going on with its eye. It appears to be wearing an eye patch. There’s also something about the back of its head that looks off — too much fur perhaps.

The style and amount of detail between the tiger and the boom box conflict with each other in a way that suggests you’ve just married two separate illustrations, which you seemingly did.

Also, why a retro boom box that looks like it comes complete with a cassette player? Do they even sell these things any more? Maybe a retro theme is what you’ve chosen to go with, which is fine, but the style of the illustrations does not have a retro look, which adds up to a bit of a mismatch.

Again, though, I do like the style of the tiger, but if you addressed the things I mentioned, I’d like it more.

As for the logos, well, I like them less — sorry.

I like the colors, but there seems to be no compelling concept behind the compositions. You’ve just created a LP monogram of the sort that the owner of a construction company might come up with.

It took me awhile to see that the LPs you’ve tipped to a diagonal are actual Ls and Ps — it reads like a tipped F. Just a suggestion, but if I were you, I’d try something a little more visually suggestive of a lawn party than trying to combine a couple of letters.

The cursive Ls in your last examples are interesting, but again, are you going for a retro look? If so, it needs to look deliberate and consistent. The bottom one in the left column is my favorite since the cursive L seems to complement the typeface you’ve chosen that spells out the rest lawn party.

Thank you, I really needed to hear this. I didn’t actually realize I was getting bogged down in specifically making an LP logo and your comment really helped me take a step back. I’ve scrapped all of it and tried to start fresh, I made a couple of logos where I tried to use sound waves to mimic land/grass/(I suppose lawns). I think I still have a while to go, but do you think that I’m heading in a better direction now? I’m still not entirely sure which color scheme I should go with, as mentioned the school’s colors are orange but in order for the land/outdoorsy aspect of the logo to even have a CHANCE of being picked up I felt like I should use green. Anyway, if you have time please let me know if, even if you don’t like the logos, this direction is better. Thank you so much! 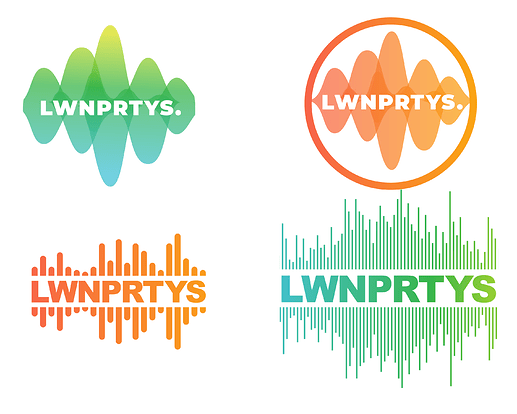 Welcome to the forum st17!

Firstly what fun assignment you have on your hands!

@Just-B is right though in that your lettermarks (while some are pretty cool) don’t really convey the intended message that you’re representing a party; and unless you’re constrained to making an avatar or app icon - I would ster away from doing a lettermark and do a wordmark instead.

I’m liking the direction these ones are heading in:

Although I would say that leaving out the 'A’s probably isn’t necessary, as legibility should be your absolute first priority. Maybe you could explore this same idea with more colourful soundwaves (it currently looks a little bit electronic - which I’m guessing your party isn’t)?

Im liking these ones more! more so the lower one because it functions better as a logo. Gradients are cool tho

Awesome, thank you! I’ll definitely just spell the word normally because I get the legibility issues.

The concert/festival isn’t necessarily electronic but it it generally has either a djs or hip-hop/rap artist as the headliner. Even though we’ve had electronic artists in the past, do you think that these color schemes are still too heavily electronic?

Lower two are pretty! As @Billyjeanplxiv has said those two are looking very cool.

Maybe I’m way of base it will come off looking totally crazy or become too busy, but I was thinking something with a lot more colours in it, maybe not in this configuration, but a lot of colours like the ones in this logo: 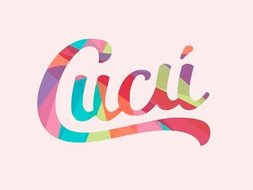