This is a logo design for a made up company called txt.

Here’s its brief:
It’s a custom-built app where employees can log in to discuss sensitive company information, brainstorm project ideas, leave anonymous feedback on company decisions, and produce personal calendars for tasks assigned to them.

It should be bold, easy to read, and memorable on first glance. Our target demographic are large corporations, so we want to avoid anything that is over-complicated or untrustworthy.

Let me know what you guys think! 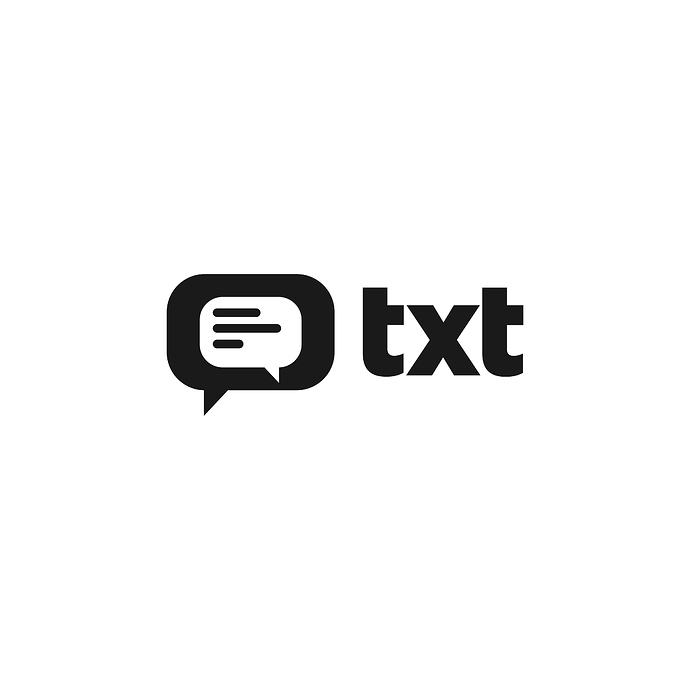 the logo or company?
the logo is generic and not innovative, but that does not matter that much anymore.
Humans hate using brain cells nowadays.

for the company, why would i text important messages through a 3-party app?
some businesses forbid text vital information about their company.

If the company is named txt, placing the mark in front of might cause it to be read as O txt or even Q txt.

In addition, the mark and the word mark have very similar visual weights, which fail to provide the structural hierarchy usually needed. Instead neither is clearly subordinate or dominant, causing the composition to lose its visual coherence and break into two separate competing objects.

I’d likely avoid using the speech bubble as a logo. it’s an obvious cliché. Clichés can sometimes work, but here, the rounded corners, the unequal widths between top and bottom and the horizontal lines all come together to be slightly geometrically awkward in a way that neither matches nor contrasts with the txt.

With a name as short and stylized as txt, my first inclination would likely be to work up something with only those three letters as the logo.

Does company culture really vary that much from agency to agency?
RedKittieKat April 22, 2020, 5:40pm #4

If the company is named txt , placing the mark in front of might cause it to be read as O txt or even Q txt .

I immediately read that at Q txt

For me, it’s the text bubble within a text bubble. A single shape would simplify things.

Oddly enough I didn’t read it as a “Q” , though two other viewers made the misread, which is cause for concern.

I was thinking put the txt inside the speech bubble. But Just-B is right – unless you can make the cliched image work well, it’s best to avoid.
Also, for such a short name, the logo is a bit too long for my liking, if that make sense!