I sent these options to the church staff suggesting they pick the one on the top row: 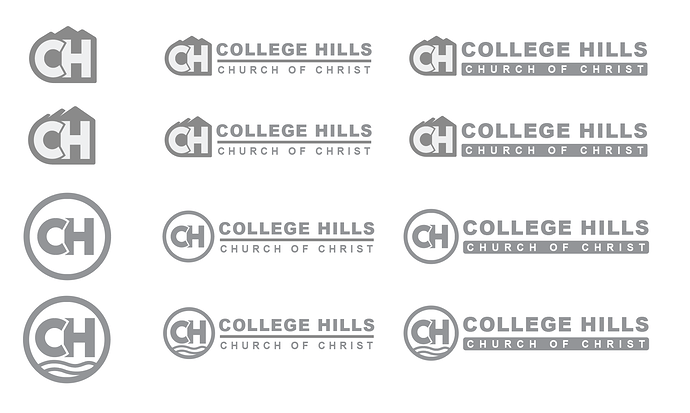 They agreed that the top one was their favorite. However, they decided they wanted the hills to be more pronounced and thought the middle mountain was too high - a frustrating and bizarre response, I don’t think that’ll work. They’re open to adding hills that look less like waves to the circle shaped logo. I’ve tried doing what they suggested but I don’t really love the results: 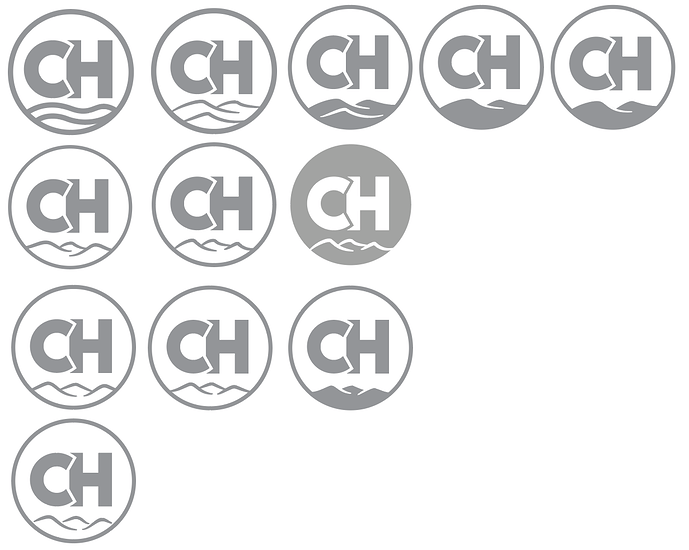 I feel stuck and could use some suggestions on either of the two variations. Or maybe I should start from scratch - the only that really has to stay is the CH. They’d also like some hills shown in the logo.

They look nice bro, am not sure which I would say is my favourite. If the hills are big thing I would say the top one, if not would probably say the bottom one looks best.

Although one thing that bothers me is the way the CH and overlap, am not sure how to resolve it though:

Have you tried moving the C to the left and cuting it straight down?

Or you could try merging them into one?

the problem with the CH overlap is the bottom points of the C matching the vertical of the H.
It gives the H the optical illusion of bowing, which is obnoxiously attention-drawing.
The one with the white outline works better than the gray.

I’m not crazy about the CH monogram either. It sort of makes me think of Pacman, like the C is eating the H. You’re saying that has to stay, though, so it might be a matter of saying “it is what it is.”

Out of what you’ve shown here, I prefer the top, middle of the second image. This are pleasing looking hills. You might need to make the negative space a little larger to make sure it holds up at small sizes.

If you chose to remove the “CH” monogram logo, I’d suggest tapping into whatever else you have going on behind it. Are those hills and a lake?

Also, what religious elements can you bring into a logo? An obvious answer is the cross, but I’m sure you could creatively incorporate something else as well. You want the subject matter to tie to the visuals.

Hills and water are religious elements, aren’t they?

Yes, I’d say so. It’s all about context. I think the elements were done well, so I didn’t want them to be removed if they end up removing the monogram.

Thank you all for your input!

The church is happy with the CH. They’ve been using it for a few years now so it works as an identifier. I know it’s not perfect. Unfortunately they brought in a branding consultant who suggested we use Arial font so that’s the font I have to use. Maybe I’ll try using the narrow version to create contrast between the CH and the wording.

I actually already tried incorporating a cross into the design (they suggested this) but sadly they decided later to go in a different direction. They felt that the cross looked forced. I could still send them some alternative cross options and try to change their minds. I guess hills and water are loosely religious. But a cross is more obvious.

Here’s what all the rejected cross logos look like: 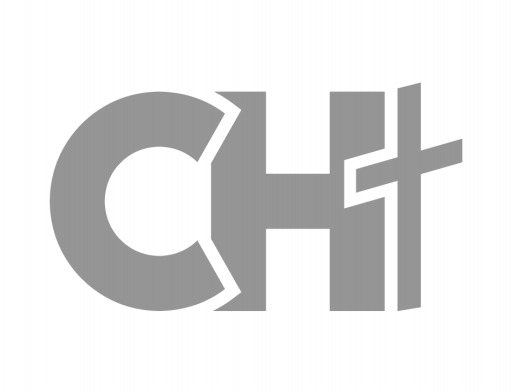 Sounds like the client is playing art director here. That rarely works out to something that works well or that they end up liking either.

Did the brand consultant explain why they suggested Arial?

Anyway, I like what you did with this bottom version. The font weights provide nice contrast, and the cross and mountains (which could double as water, which is a nice touch), look nice.

Totally agree with @creativeboost - would frame the discussion up to your client that they ultimately make the final call, but that you’re not doing them any service if you don’t bring your expertise to bare.

Maybe they thought it looked more like a mountain than a hill. Making them more pronounced, as they suggested, might make them look more mountainous, though. Compositionally, they shouldn’t all be the same height since hills and mountains, by nature, are irregular

They’re open to adding hills that look less like waves to the circle shaped logo.

I agree the rhythmic look of your low hills make them look more like waves. I’m not so sure that I agree with you that your examples of them looking more like hills aren’t working — I think there are some possibilities there. What concerns me, however, are the thin lines that will muddy up and fill in when reproduced at smaller sizes.

The church is happy with the CH. They’ve been using it for a few years now so it works as an identifier.

To me, religious logos should look a bit more traditional and softer. Using bulky, geometric, sans-serif letterforms runs counter to that notion. Then again, there are some cultural dissimilarities between Tennessee and Utah that might negate my concerns. There’s also the value of brand equity. If they’ve been using the overlapping letters for years and the congregation identifies with them and associates them with the church, I’d think twice about abandoning them. From a practical standpoint, I am a little concerned with the lines separating the overlapping letters filling in at small sizes, but if this hasn’t been an issue in the past, maybe it’s okay.

They felt that the cross looked forced. I could still send them some alternative cross options and try to change their minds.

Integrating the cross more smoothly into the monogram might risk making the cross look more like a lowercase t than a cross. I don’t think that would necessarily be the case, but something to be aware of if you explore the option further.

Unfortunately they brought in a branding consultant who suggested we use Arial font so that’s the font I have to use.

Just a possibility, but I think they might have found a bogus brand consultant. I don’t dislike Arial, as some designers do, but I’d never suggest using Arial as a logo typeface. It’s likely the most generic typeface on the planet due to its ubiquity. Maybe eliminating the need to install a new typeface on everyone’s computer was part of the brand “expert”'s logic, but for the logo itself, I’d definitely change it to something just a little more distinctive.

Sounds like the client is playing art director here. That rarely works out to something that works well or that they end up liking either.

Yup! Been there, done that. Sometimes it’s inevitable because of the clients involved. Other times, it’s the result of the designer failing to take control as the expert and letting the client fill the power vacuum. I don’t know which one is applicable here, but based on everything you’ve written, the roles have definitely been reversed.

All things considered, I like the following design the best out of all you’ve shown us. But I am concerned about those fine lines turning into pixel mush at small sizes.

Your thoughtful feedback means a lot. Thanks for taking the time.

Thanks. I just wish it were a simpler shape (like the cross version)… I think the one you suggested is probably the best.

Integrating the cross more smoothly into the monogram might risk making the cross look more like a lowercase t than a cross.

Yes we considered the lowercase t dilemma. That’s why it’s shown at an angle. I like this logo better than the hills logos because the shape is more simplified and recognizable when smaller.

That’s what I was wondering. I should just talk to her about why she picked Arial.

Sometimes it’s inevitable because of the clients involved. Other times, it’s the result of the designer failing to take control as the expert and letting the client fill the power vacuum.

I think it’s a little of both. I should have explained my early designs so they could understand why they would work better than all the suggestions they’ve requested. It also didn’t help that the branding consultant has directed much of the feedback and design from the beginning.

I am concerned about those fine lines turning into pixel mush at small sizes.

True. I will suggest that the logo should be dynamic, so that when it gets so small, only the CH remains. I’ll play with the white space in the variation you suggested and try to simplify it.

I’ll let y’all know how all this turns out later.