Moved to another country?

I want to move to another country. where can I get started and which country is good for a move and started a job in our sphere? (Europe) (or maybe the USA

Yer kidding,right?
Move as in immigrate? Become a resident?
Sorry to say, graphic design is not one of the professions most countries are willing to import as new residents. Look up immigration requirements for where you think you want to go and work from there.
You may find Engineering, Computer Science, or BioSciences are more likely to gain you a new citizenship. That and a lot of money.

Here’s what it says you need to be to get a Green Card or Work Permit in the US.

U.S. immigration law provides aliens with a variety of ways to become lawful permanent residents (get a Green Card) through employment in the United States. These employment-based (EB) “preference immigrant” categories include:

Oh, and since some websites qualify Graphic Design under EB-3 here are the further requirements

You may be eligible to be classified as a skilled worker, professional, or other worker depending upon your education, skills and work experience.

Yah, that’s not Graphic Design. You can’t even swing a stick out in the street in the US (and most other places) without hitting a graphic designer these days. You don’t even have to throw it.

And a generic one for the EU. That’s all their bold BTW. 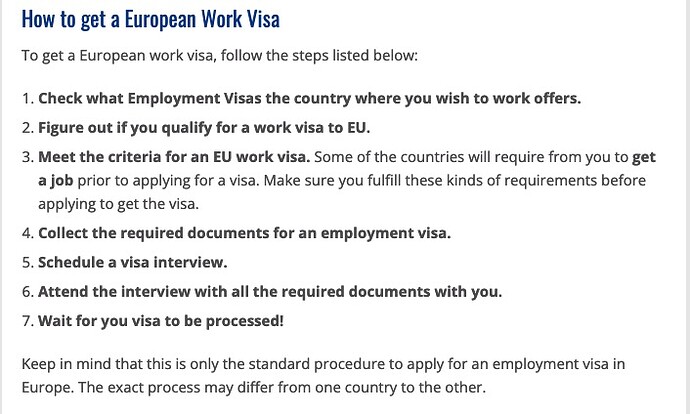 Ya, I know the OP is long gone. But everyone seems to think this is easy to do. Just move to another country. Yup. Sure. They don’t need any more Graphic Designers either.

I honestly think most have no clue. Especially to move here.

My sister met and eventually married a sweet chap from Morocco. After about a year and half of dating they decided they wanted to marry. However they had to wait for permission from both countries. You don’t just get married or you find out the harsh realities very quickly. They began the process required. They both had to fly back and forth to the Moroccan consulate and US consulate twice. They had to hire immigration lawyers. They had to compile a very specific dossier, that was about 5 inches thick and send that to the consulate for final approval. After another two years … yes TWO years, they were granted approval and then given a whole new list of instructions

Let’s just say this was not inexpensive.

Another fellow I know through a friend met a woman online who lives in South Africa … well it was love at first site and he flew there and married her. They have been married now for six year and still don’t live together. They haven’t seen each other at all in 3 years due to the pandemic. The only way they can see each other is a couple weeks a year flying back and forth. Why you ask? Her country won’t let her leave because she didn’t get permission to marry a foreigner.

So between this and what PD has brought up … anyone thinking they can just pick up and go, for whatever reason … think again. You better have your ducks in a row and they better all be packing a lot of cash.

This is insane!! Why do the governments care so much about who marries who from where?

My brother has lived in America, Sweden, France, back to Sweden, and back to America, and soon looking to move to Australia.

He has a PHD, so he has no problem working most places around the world.

He met his wife, who is Australian when he moved to Sweden, she was the one assigned from the Lab to pick him up from the airport, as he didn’t know anyone there. That’s how they met.

He went back to Sweden for about 2 years, then the funding for that Lab was not available, so the boss there packed up everything and moved the Lab to America, where he could get funding.

They moved, and the Lab paid for everything, flights, u-hauls etc.

All this business with religion is important to some people, and it makes the marriage legal in the country with a certificate to show other countries that you are legally married.

You can get married other ways, without a church involved, but then you risk alienating members of your own family who are devoutly religious.

For example, my brothers wife, her mother, goes to church on a Sunday for 12 hours, every Sunday, and has done all her life.

And also countries are worried about illegal immigration, and using say Americans to get green cards.

My brother and his wife got their Green Cards in the US but it took a long time and a lot of money to be legally resident in the country.

The governments have to know who is legitimately in the country and ready to work, so they can provide education, jobs, infrastructure etc.

If they let in anybody to the country - they are running the risk of overpopulation and not having enough skilled workers to do the tasks that are badly needed within a country.

There’s many facets to moving country.

You can get clients wordwide on freelancing platforms such as Dribbble and Upwork.

What you need to start is a decent portfolio and the ability to convince your prospective clients that you can solve their particular design problems.

It’s not easy, but it’s orders of magnitude easier than moving abroad and starting a career on foreign soil.

If you want to do it and make something of it then the options are there for you.

What would the world be like without Hamdi Ulukaya, Einstein or even Arni Schwarzenegger?

And many more famous people who immigrated and made something of their life.

Even if you are on the right track you will get run over if you just sit there.

I moved from New Zealand to Taiwan to study Chinese and do a bit of freelancing on the side. I gave up on the study after a year, but 15 years later and I finally moved back to New Zealand. Taiwan was a great place to be a ‘digital nomad’ (that term is a bit naff), but there are plenty of cafes where you can take a laptop and sit all day and through the night. I absolutely loved it!