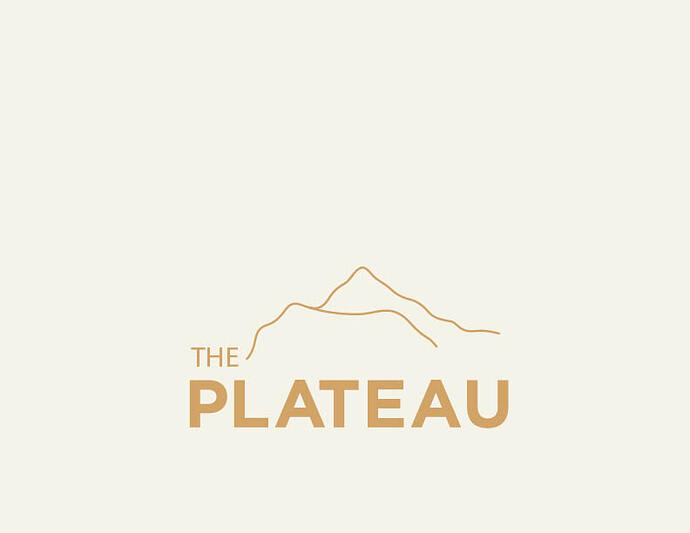 This is for a land estate just about to open. The font used is simple Gotham, which the client is happy with.

Any feedback as to the radio and over all feel of these two lines to symbolize a ‘plateau’ plus general aesthetics would be appreciated.

No way I’d guess that was for real estate.
I’d be thinking adventure company, maybe a movie … there’s just no reference to real estate within the logo at all.

I’ve looked up quite a few of these mountain range real estate logos and 99% of them say ‘Real Estate’ - or put in some sort of windows/roof icon in/around the mountain range.

In terms of what the word Plateau means, I don’t think the back range meets the requirement.

As for the lines, there’s not much to critique.

As Smurf says, there is a clear mismatch between the name and the image.

Moreover, unless the name relates to a local area name, then Plateau has negative connotations (or at least, not positive ones); ambivalence, lacklustre, no ambition, straight travel. Whereas works like peak do imply upward progression. Unless, Ali say, this has a direct local place name reference, then I’d think about changing the name too – if it’s a new venture…

Thank you for your feedback. It’s a development company, land estates- land for sale, I should say more than ‘real estate’. They will probably the most expensive blocks of land in the area. I can not change the name (although I understand what you are saying). I am looking to perfect the lines, am I fighting an uphill battle?

Hi Spout, thank you for your comments. The plateau has positive connotations within the area I believe. Is the mismatch being that this doesn’t look like a plateau? Or is the whole concept not right? Thank you again. ~Polly

Unless it says land developer on there somewhere. Or some sort of indication…

As far as I am aware plateaus are flat. Your lines are not.

Fair. The guide they gave me had ridges. I know what a plataeu is so I have been trying to find a happy medium. Thank you again for your comments.

The iconic mark will never work at small sizes, since the lines are way too thin.

Moreover, the logo is very bland. There’s literally nothing memorable about it.

Here are some top-level logos for inspiration: Creators of many of the world’s most iconic and enduring brands, Chermayeff & Geismar & Haviv is an independent New York based graphic design firm specializing in the development of trademarks.

Defining and designing brands that make a difference

I want all designers who think a logo has to describe what it’s selling to put a lightbulb and a computer in their personal logo, just so we’re all clear what it is you are selling.

Granted this one, when using the word “the” before “plateau” is confusing. If it were just “plateau” it could be anything and it would be up to context to bring out the meaning. Real estate logos are generally used in a context that pretty much covers what they mean.

This logo is mismatched in terms of weight. The line art is whispy and thin, the word plateau heavy and overwhelming.

A plateau is a status quo, nothing spectacular to look at, a lack of progress, just flat and boring, kinda like the line art here. Look at some pictures of actual landform plateaus and get some better ideas to maybe convey it as more a transition from good to better. Kinda like upscaling when buying a house or renting a new office space.

Guess I’m always trying to draw out the decisions for whatever design decisions they made.

Why peaks instead of a plateau for the background. Why the word Plateau?
Why is The less important than Plateau?

Often it’s common to have a tagline in a logo when it’s presented as a standalone, without any context.
Often when in context the tagline is not required.

My question is, is a tagline required for this for such situations, or has it been considered.

For example, it would make a lot of sense on a business card to have the tagline.
But not so much on the brochure.

But trying to draw out reasonings behind decisions. Instead of just pointing to lots of successful logos.
They are a success for reasons. And from being global tech giants, like Googles accidental logo, to FedEx, to Starbucks - all a success for reasons of different calibre.

What I want to know with this logo is - why are the design decisions made here and have other considerations been taken into consideration.

I am looking to perfect the lines, am I fighting an uphill battle?

The reason you’re not happy, I strongly suspect, is that you’re trying to save a logo that shouldn’t be saved. You don’t have to show a literal plateau, and, aside from that, what you have here isn’t working for a number of reasons that others have pointed out. Let’s see the other concepts you’ve worked on to this point.

Thank you for all of your comments, and really great feedback. I have been working on some new concepts, please see attached. I hope the community is having a great day 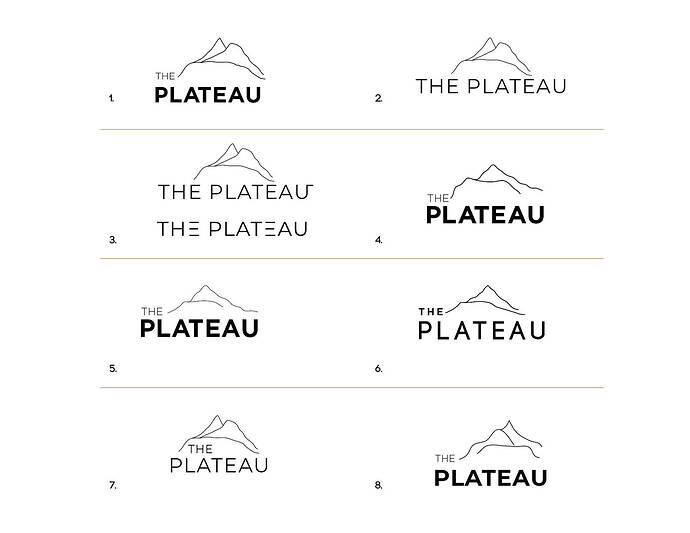 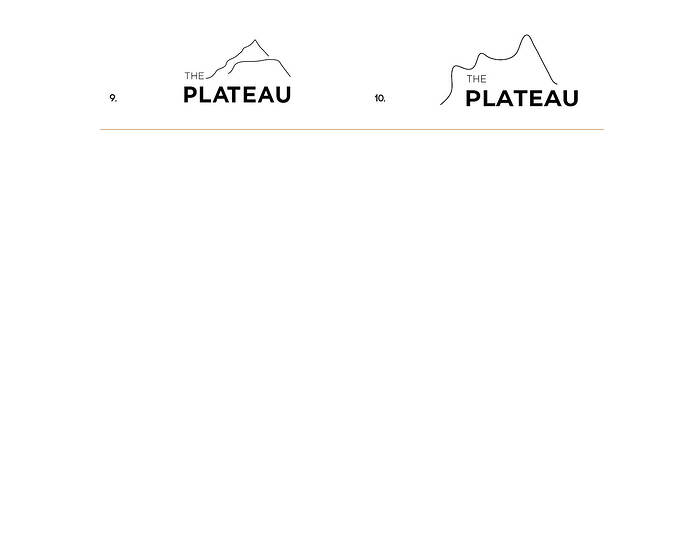 I have been working on some new concepts, please see attached.

These don’t look like new concepts. You’re redrawing the same idea while ignoring every opinion and bit of advice.

I’m not saying a drawing of a plateau couldn’t work, but I am saying that the idea you’re tenaciously hanging on to isn’t working very well. If I were you, I’d give up on it and try a different approach that didn’t involve outlining hills and mountains with a bunch of thin lines.

Just-B is so right, you must consider another direction, or 4, or 5. I almost never say mangling type into physical objects is something that will work, but has it occurred to you that the word PLATEAU could be the plateau? For cryin’ out loud, it’s got a built-in plateau of its own, right at dead center!

These don’t look like new concepts. You’re redrawing the same idea while ignoring every opinion and bit of advice.

I was going to say pretty much this exact same thing.

I would say that you have iterations of one concept… we used to bracket our efforts by thinking about strategic buckets. Like this:

Bucket 1 - “close-in”
we always called options suggested by the client “close-in”. Meaning close to the request. Like in this for instance the client requested to use a specific imagery so you do your due diligence and pursue it. I’ve chased a concept just like this for a real estate investment company…even tried to tie it back to financial line charts and in that case I didn’t want the lines to come back down

Bucket 2 - “explanatory”
A logo doesn’t have to directly explain what you do BUT for a new company that’s often quite helpful as they attempt to build a client base.

Bucket 3 - “stability”
This is just me spitballing but, a plateau does evoke some positive ideas - like stability. In a rapidly fluctuating market that could be a real plus. On a bucket like this, everything would be tailored to evoke that feeling. From your font choices to colors to imagery. You could draw inspiration from companies that position themselves similarly.

Bucket 4 - “cultivation”
More spitballing but, you mentioned they would probably be the most expensive in the area. Perhaps they intend to market directly to developers. etc…

The point I’m trying to make is that each option you present to a client should have a ver different “why” - how it will serve their business, represent their company, express their values and so on. It’s my opinion that we need to sell ideas not just imagery.

I should make one other point while I’m running my mouth. Never tell the idea like I just did, show the idea in its best form. It’s so easy to kill ideas and most of them die right away - at the point of discussion or when subjected to our own internal evaluation - before they can be realized in any way. This is a visual medium - you have to see it.

I apologize for going on so long. Good luck!