The end of May means rattlesnake season at our house. Here’s a photo of our first visitor of the year from just a few minutes ago when I went out to mow the lawn.

After buying the house, we found out from the state wildlife agency that there was a long-established and protected snake den immediately behind our back fence in some cavities in the exposed bedrock outcropping on the hillside. Our yard sits squarely across their distribution path as they disperse from their den each year. I really hate these things.

I know a guy who was bitten twice by the same rattlesnake — once on his thumb, the other on his shoulder. Within several minutes he had gone into shock, could hardly breathe and needed to be helicoptered to a regional medical center. His thumb still looks mangled up because of it. 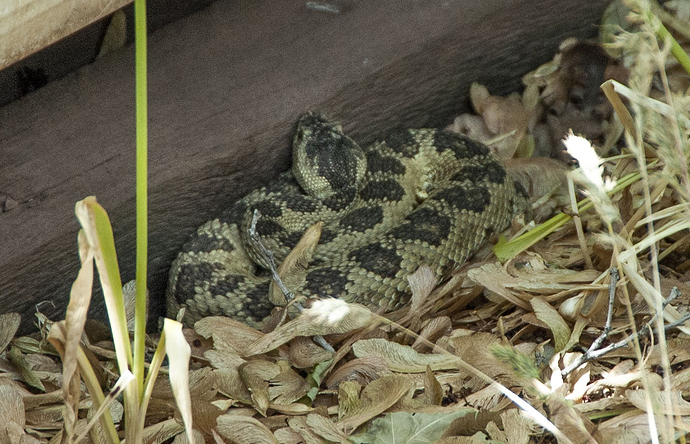 That is a great pic … but damn … I couldn’t live with them right underfoot. I don’t have a fear of snakes either. In general, I like them … but not the biting, poison me kind

They sort of get in the way of enjoying our yard. Every place we walk, we need to keep scanning the ground around us. I’ve had some close calls with the beasts, but one’s never managed to bite me yet.

That’s a very good thing. It sucks that you can’t even enjoy your yard, I wouldn’t be out there at all. Are they a rare variety or something? I didn’t even know Rattlers were protected.

They’re Great Basin rattlesnakes and despite me wishing they were rare, they’re not. They live in the dry foothills in the western U.S. For some reason, Utah lists rattlesnakes as protected. I was told by a state wildlife biologist that it has something to do with them being top-level predators and a vital part of the ecosystem that keeps rodents under control. I’d much rather have a yard full of mice than venous snakes, though.

Oh, hell no. I’d move so fast there’d just be a dust cloud behind me like in the cartoons.

What do you do if you’re in your yard mowing the grass or whatever and you see one? Back away slowly? Do they take off when humans come around?

Do they take off when humans come around?

Not really, they stay still and slowly coil up into a defensive striking position before rattling. At that point, I just go back in the house and wait until they move on. 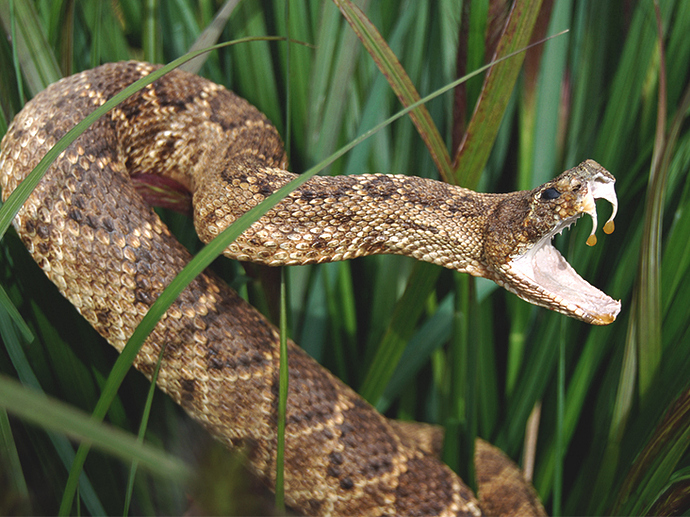 Learn about rattlesnake bites, including how to treat them and the expected timeline.

Given the cost of Antivenom I would check your health insurance covers it.

Is there any way to keep the snakes from coming on your property? A snake proof fence?

I talked to a wildlife biologist friend about that several years ago, and he said that installing a mesh screen around the perimeter of the property would work as long as the bottom was buried several inches beneath the soil. He also mentioned that if a snake got in, it likely wouldn’t be able to get out and we’d be stuck with it unless we put in special one-way snake escapes every couple of meters. In addition, the fence would drive more snakes to the neighbors’ property, which wouldn’t go over well. It would also be expensive considering the irregular layout of our yard.

I’d never thought about the cost of anti-venom, but I guess I’m not surprised at its expense. We get our dog vaccinated each year against snake bites. Supposedly, the vaccine produces antibodies that limit the swelling from the venom.

For what it’s worth, I went out to make another attempt and mowing the lawn earlier today and found another rattler. It might be the same one, but the coloration seems a little different. I showed this photo to that same wildlife biologist friend, and he says it looks like a pregnant female about to give birth to 10–20 venomous little snakes. Ugggh.

I think you should call your estate …

I’d almost invest in a few of those if they would take out the rodent population in my back yard.
From voles to chipmunks to squirrels, it’s sometimes pretty darn scary the number of vermin present at any one time…
Neighbors probably wouldn’t appreciate it though. They aren’t common here.

No, no, no, no thank you, no, absolutely not, no, definitely noooooo.

We have hawks and owls in our neighborhood to help keep the rodents at bay.

I have hawks, owls and a den of foxes (the mamma had her 3 pups out on our back lawn early last Saturday.) I think they are all vegetarians. Or we just have that many rodents. Counted 7 gray squirrels on the neighbor’s feeder last weekend.

You need one of these 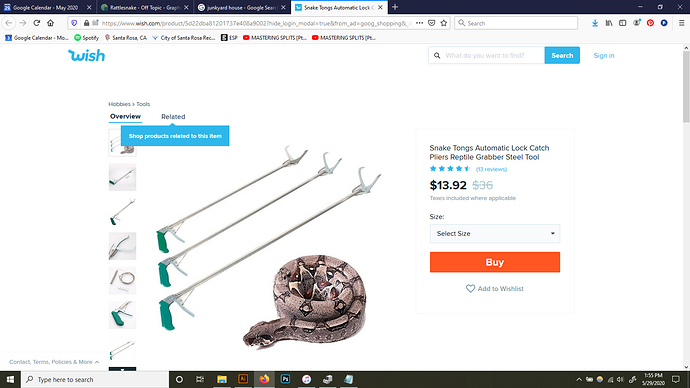 You need one of these

Only if it was about a mile long.

Speaking of rattlesnake bites … Did you know there’s now a card game of Oregon Trail?

That could work! It might singe Mrs Just-B’s flower beds, though.