Seeking feedback/help for a design for a client

I hope you are all well and I hope you can help me. This is going to be a bit lengthy, but I wanted to give you some context.

I am working with a client who hired me to create a brand book for his start-up in August (an English teacher who works with law firms through his mobile app). He gave me an excellent brief, which helped me a lot as I am still new in the field of graphic design. Before I even started to work on the brand book, he had another design request for his website - which I was happy to create too. He was well pleased with that and gave me a new task, which still was not the brand book. This new one is about creating a WhatsApp invitation for lawyers to join the community that he is tirelessly building.

He needs me to create a PDF (not sure whether this will be an interactive PDF or linked to a WhatsApp invite link), that invites lawyers to join and has testimonials in it too to strengthen his message.

We had weeks of meetings, and he is still not happy about what I have created. But instead of telling me what is not right, he just says that this is not quite there yet…

Just to add another thing to the story, he is basically a coach as well that helps people to achieve their career goals, and he is helping me with that too. Hence why he basically wants me to find out why my design does not work. I have been through hours of research and studied different principles over and over again. Every new design I created was still missing something. At this point, I am just really stressed out, because our collab that started off well, is becoming a nightmare for me, and I need someone to look at my design and give me some advice.

If anyone can help me I would really appreciate that. I will attach the PDF in JPEG

Thank you guys in advance.

Part of the process is constructive feedback.
If they can’t provide that then move on to something else.

Leave it with them to provide something that you can work with.

“It’s not quite there yet.”
“Jazz It Up!”
“Bejazzle it”
“Make it more designery”

These are not acceptable feedback terminology.

If they aren’t willing to put the work in then why should you?

I agree with smurf. “It’s not quite there yet” is not helpful to you as the designer and will only continue to waste both your time and the client’s time by creating revisions that still “aren’t there”. What is considered “there” to one person could be completely different to another so this client needs to provide you with some actual direction toward what they are looking for. I would say your next steps are to identify the goals for this project with the client and then have them clarify how and why this current design isn’t hitting that goal. If they can’t give you that information, you certainly can’t pull it from a hat. If that doesn’t work just tell them maybe another designer would be better suited for the project and move on, don’t continue to waste your time.

As far as the actual design, it looks fine to me. Nothing is glaring or awful about it, if I was the client, I would be happy to move forward with that piece.

What everyone already said, however, for a program pushing better english speaking, the first page has a lot of grammatical oddness.

“Come and join to our highly professional and hard working lawyers at Cuatrecasas who already found their confident English speaking voice with the app that puts a speaking coach into your pocket!”

First it repeats a lot of what was said in the line before it (“Are you looking for the English speaking coach that fits into your pocket?” )

Second, IMO it should say “Come and join our highly professional and hard-working lawyers at Cuatrecasas who have already found their confident English speaking voice as a result of Patch.”

For obvious reasons, you should get rid of Putin.

Speaking of which, the header and footer would probably look better if you used a solid background or a uniform picture.

Using the image of Barrack Obama for commercial purposes might be risky: 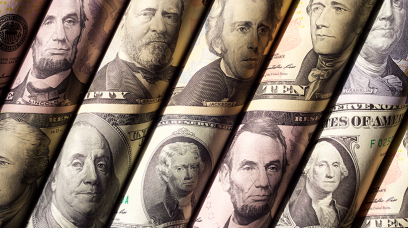 Trademarks, Publicity, and the Presidency

Can U.S. presidents protect their names and faces with trademarks? And, on the flip side, is it okay to use the president's name or image on a product? Find out how trademarks and other intellectual property rights apply to the Commander in Chief.

I agree with what the others have said.

The overall design is fine. It’s clean, straightforward, easy to understand, looks good, and works well. If it were me, I might change the color scheme from a cool turquoise to a more aggressive and warmer color, but that is only my personal preference, not a flaw.

As you already know, you’re getting unhelpful feedback from your client. There’s nothing wrong with the design, so if there’s something your client doesn’t like, it’s his responsibility to tell you what it is. You’re not a mind-reader, and he shouldn’t expect you to keep showing him ideas with the hope that one eventually strikes his fancy.

Picking up on what @CraigB stated, the unclear and poorly written text reads as colloquial spoken English by a non-native speaker unfamiliar with the rules and conventions of formal English writing. The poor writing would be a deal killer for an app purporting to teach business people (lawyers) how to communicate in English.

As @Jakub_Trybowski mentioned, for exceedingly obvious reasons, remove Putin from the header photo.

For other reasons, remove Obama, Angela Merkel, and any other well-known person. Showing these people without their permission implies they use and endorse the product. Including them would potentially expose your client to legal action. Besides, it’s simply untruthful and misleading. Instead, use generic business people from a stock service.

I thought I recognized some faces but didn’t realise who they were until I saw the laptop.

Weird market too, language app for lawyers English only?

You could show the app on a mobile device, or in a legal setting. I’d imagine a court wouldn’t be appropriate, but a lawyer office or with a client.

Anyway, it’s all pretty much said.

If that’s what they supplied you are not a miracle worker.

One other thing: the testimonials at the bottom seem suspiciously fake. The photos appear to be idealized examples of attractive people instead of real individuals with actual titles from genuine law firms who provided truthful testimonials.

Whether genuine or not, they seem questionable at best, if not fake, manipulative, and dishonest. As I mentioned, the overall design is fine. However, the content, from the poor writing to the photo of Putin to the questionable testimonials, would push me away from signing up.

If your client focuses on the already-good design while ignoring the content’s subliminal confidence-erroding messages, he’s focusing on the wrong thing.

Thank you guys for all the answers above. I’m actually not working with him anymore, as he decided that he does not need my design anymore, as he is using another tool/person in a different way to achieve his goal. Whether it is a different designer or not, will never know. I just use this experience as a learning example of how not to work with a client…