Hey everyone! I’m a student in a print publishing class, and my teacher wanted me to post my first magazine spread for critique. I’m not a pro but I’d love any feedback you can give a beginner!

• Message: The magazine spread is for an article about implementing Victorian mourning culture into the modern age.
• Target Audience: People interested in history, especially the culture of death and mourning, and those who are undergoing the mourning process themselves.
• Use: Placed inside a magazine about societal and cultural issues and topics. 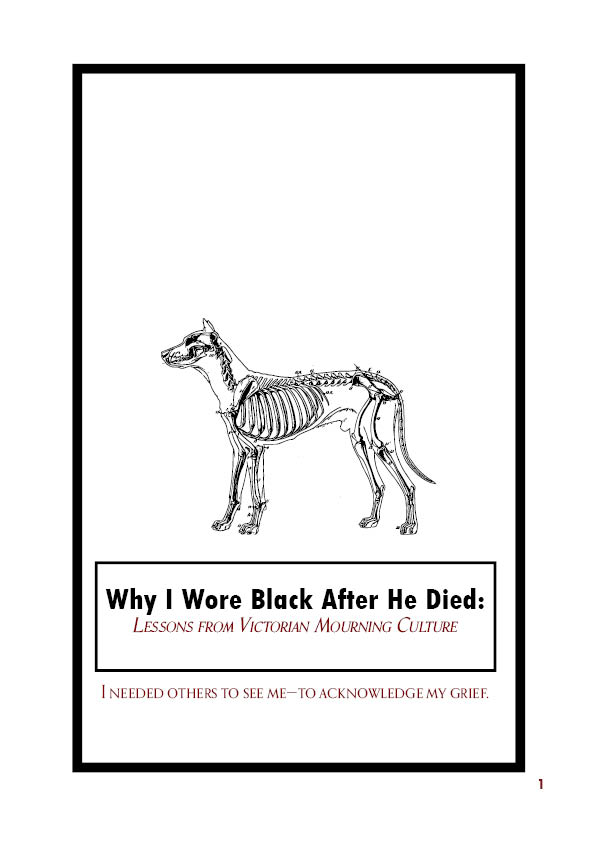 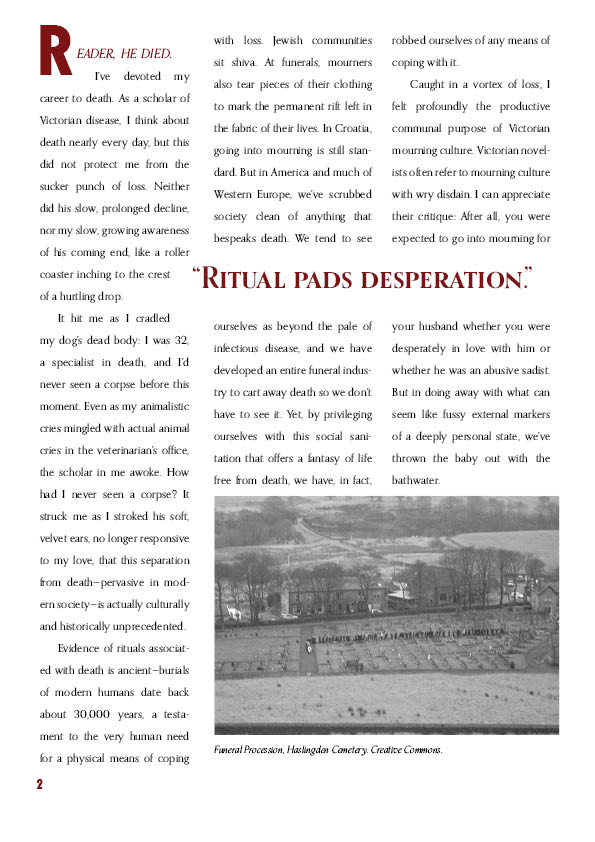 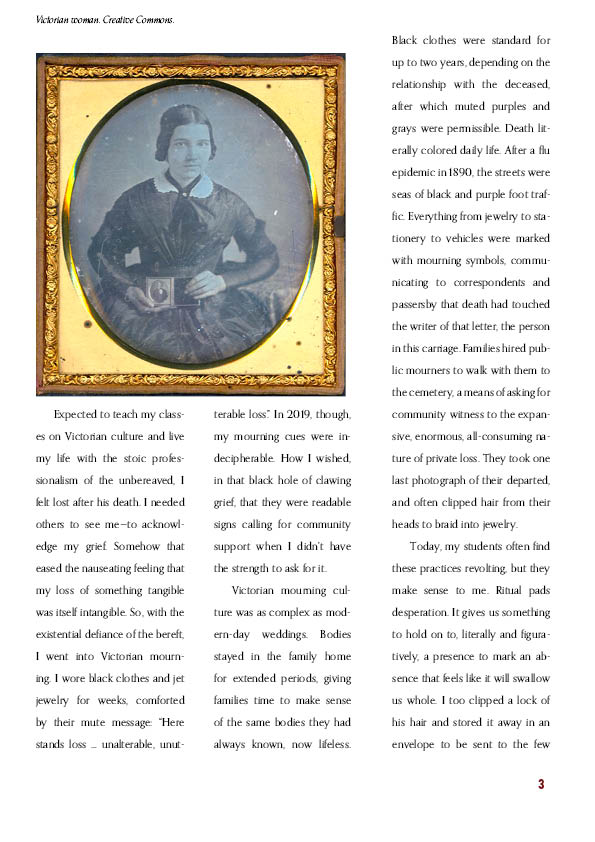 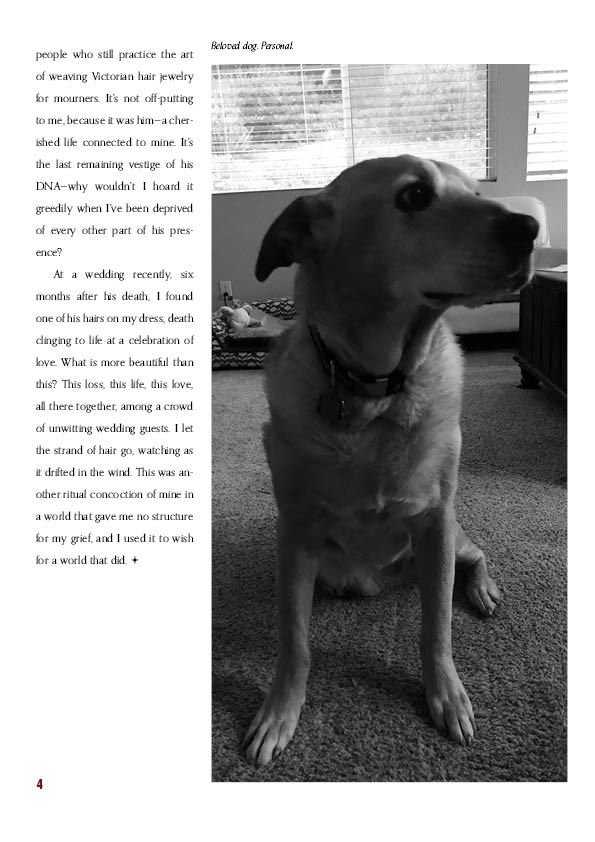 First, if you are going to use a small caps typeface for a title, be sure to select one that is specifically made to be small caps. The weight of the first letter in your title "Lessons from…) is heavier and bolder, which looks weird.

You gave the article contents away in the second part outside the title box.
Why did you where black? Because you need others to acknowledge your grief.
Why should I read the rest of it?

– With the above change, you’ll want to redesign the 1-2 spread, which is fine since it needs it. I can’t suggest fixes to what you currently have needs more than minor tweaks.

– On page 2, you have a drop cap with a 1-line paragraph… This looks pretty awkward. Loose the drop cap or edit copy so that you have more lines of copy.

– Captions typically go under the photos.

– When you redesign the 1-2 spread, have less body copy on page 2. This will force the body copy to flow onto pages 3 and 4 which will take care of the blank area on page 4.

There is no rationale for the different column widths and gutter spaces.

On p.2 the first column doesn’t line up with columns 2 and 3. The baseline of the drop cap is left hanging in the middle of nowhere, and the first line is embarrassingly out of sync with the other two columns.

Is there no byline?

I’m not entirely sure if the folios are off, or the body text itself.

For a lead article, I’d suggest you start on a left-hand page. That way it’ll give you more room for creativity.

What’s been said by PrintDriver and Steve_O are sage advice. Take heed.

Thank you for your feedback!
I didn’t write the text for the article, but would you suggest putting “I needed others to see my - to acknowledge my grief” on the second page of the article? The original text has that as the first line of the article. Do you think it would it help the issue to not have it included on the first page?

Thanks so much for your feedback! This is very helpful and clear for me to address for my assignment resubmission.

Thanks for your feedback! What would you suggest for fixing the pull quote?

Below is a reply I gave to someone else looking for a magazine spread critique. It still applies, IMO.

Take a look at actual magazine spreads. Preferably “quality” spreads. Go to a bookstore and check out their magazines or even your grocery store, corner store, etc.You’ve been given some feedback already. But if you’re looking for an online site that may give you some decent examples, you may want to check here as well . Not all of these examples are perfect either, but it may be a good resource to at least dig through.

What would you suggest for fixing the pull quote?

First of all, does it look right the way it is?

What would you suggest for fixing the pull quote?

Well, you could choose a quote that means something to a reader thumbing through the magazine. Pull quotes serve as entry points to grab people’s attention while enticing them to read more. This pull quote wouldn’t entice anyone to read the story. Then again, a story about death, suffering, misery, depression, grief, disease and mourning is one I’d be in a hurry to skip anyway. What was your instructor thinking when he or she assigned you such a miserable and morbid story to work with?

As for its visual appearance, it would be nice if the quote aligned with the other elements on the page instead of being skewed off to the left. It would also be nice if it were longer and didn’t interrupt two separate columns by breaking them into four separate pieces. If you could do this while making it look more like a pull quote, it would be even better — for example, making the quotation marks more prominent as stylistic elements rather than simply typed from the font.

On a broader note, you can’t have cutlines (captions) randomly placed above some of the photos. Like the pull quotes; they actually need to look like what they are and contain compelling information that explains the photo and entices people to read the article. Cutlines are also different from credit lines, but you have combined the two on the cemetery photo.

The story abruptly ends two thirds of the way down the bottom of the last page. Despite the story only being so long, it needs to fit. This is commonly done by sizing and cropping the photos in ways that cause the story to end on the last line and not before.

Your columns are of unequal width. It appears to just be sloppiness, but it’ll lower your grade. There’s no room for lack of precision in magazine layouts unless it’s deliberate done for aesthetic reasons. There’s also way too much leading between the lines for easy reading. The space between the columns is also too wide. Really narrow justified columns of type (rather than ragged right) can impede readability as well — besides, they require too much hyphenation.

Your initial drop cap is just sort of stuck there, like the pull quote, not really aligning with anything.

Why are some of your photos grayscale, but the oldest photo of the bunch, is in color?

Bottom line suggestion: head to your local book store and spend an hour or so looking through all the magazines and really paying attention to how they’re designed and laid out.