Not to be outdone by Adobe’s offer of three free months of Creative Cloud for existing subscribers, Affinity announced the following today.

The effects of the COVID-19 pandemic have severely impacted people all over the world. To provide some support during this incredibly difficult time, we’re now offering a 90-day free trial of all the Mac and Windows versions of the whole Affinity suite. We’re also offering a 50% discount for users who would prefer to buy and keep the apps, including iPad versions.

If you’ve considered trying out or purchasing Affinity’s software, it sounds like a good time to act on it.

That’s pretty generous of them!

I’ve been considering buying their 3 programs for a while, as a backup to Adobe, seeing that I can get all 3 for $75 + tax is crazy tempting. Thanks for sharing @Just-B

too late, i just got used to drawing with a xp pen and photoshop on the MacBook air.
my dell ups might use that tho, Krita is bland and annoying, but worth the price.

I just bought all three the other day because I didn’t see any sense in subscribing to Adobe’s ridiculous subscription. I’m actually impressed with all three! Publisher is a little buggy when placing native Illustrator files so I re-saved them as Affinity Designer files. So far so good.

which one would you recommend for drawing and coloring?

yup just downloaded, installed drew 4 lines, then crashed my Dell XPS.
i will try again
Thanks tho!

I’m actually impressed with all three!

I’ve splashed around in 'em enough to conclude they’re very solid apps that could replace their Adobe counterparts in some workflow scenarios.

In some ways, however, it’s a bit like choosing to roller skate on a rocky path through the woods because it leads to the same place you’ve been reaching on paved roads for years. You’ll need to figure out new strategies, techniques, and workarounds. And, if a stable production foothold is integral to the way you do business, it might still be too soon for a full cut-over.

does the affinity design one have an eraser tool? That english dude and their website claim there is one but i cant find any, sads…the pen tool works better than Photoshop.
this was supposed to replace markers.

My enthusiasm for Serif’s Affinity products isn’t so much rooted in their polish and current capabilities as it is in their promise of being viable alternatives and competition to Adobe. The Adobe equivalents have more capabilities than Affinity’s software, but for many situations, those extra Adobe features just aren’t needed — we’ve just gotten used to some of them.

For that matter, one of the things I like about Affinity’s software is the lack of bloat that has plagued Adobe’s approach to updating their aging behemoths. Once I got comfortable using Affinity’s products and my synaptic plasticity adjusted to the differences, I found that they could do about 95% of what I needed, but I still found myself heading back to Adobe’s software for those things I had gotten used to and liked.

There’s really only one or two overwhelming advantages that the Affinity suite has over Adobe CC, and that is cost. A subscription to CC adds up to a significant amount of money. Affinity’s software is much, much cheaper and there’s no subscription involved or threatened cut-off from one’s work if the subscription lapses.

If I were a hobbyist just starting out, there’s. no question I’d choose Affinity over Adobe. Once I retire from this business, I’ll most likely drop CC and use Affinity exclusively — maybe even before then. For professional use, for several reasons (Adobe just being the standard being the most important), I still need to keep up my tax-deductible CC subscription. I am looking forward to the day when I can stop Adobe from dipping into my bank account each month, though.

does the affinity design one have an eraser tool?

However, Designer does have raster editing tools (like Photoshop). There is an eraser in Designer, but you need to be in what they call their program’s “pixel persona,” which enables the tools needed for editing raster imagery. I’ve circled the toggle button that switches to the pixel persona in red. Once in that persona, the eraser tool appears (I’ve circled it in green). Keep in mind, though, that the two personas are separate, which is necessary since raster and vector artwork use fundamentally different technologies. 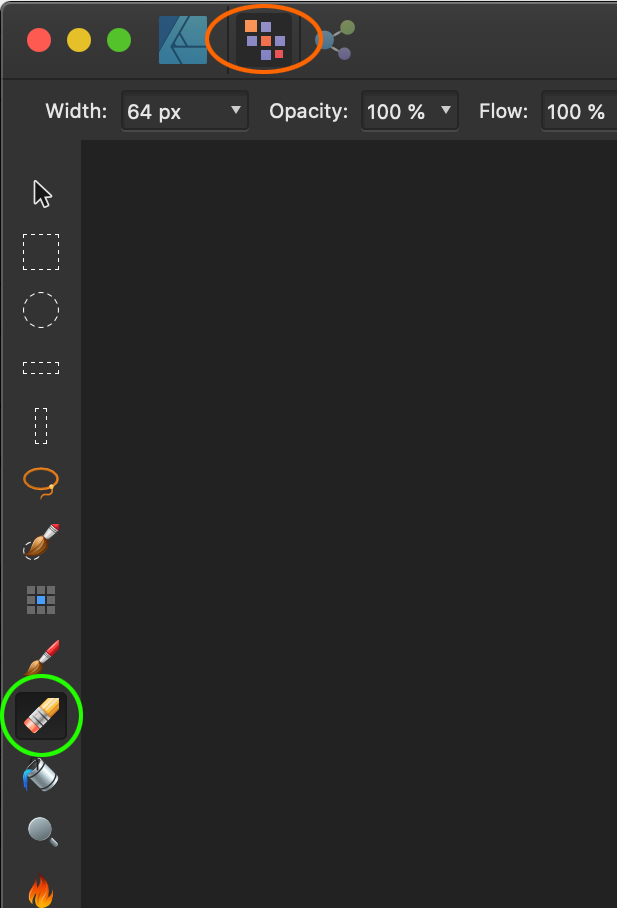 thanks for that clear and useful explanation, that cube image finally popped- up!

I can’t resist … I’ve downloaded both Photo and Designer.

Ugh, I want to give Adobe the boot, but I need to be in that space to work with a client. The thought of jumping back and forth between CC and Affinity give me a headache.

Good news: They’ve extended it until May 20

I ran a beta of Publisher for a while and felt really comfortable with it. I’ll go for the 90-day free, but wouldn’t have qualms about popping the $25 for it.

I gave up on the program and will use Photoshop to draw, color my stuph.
i even purchased a new SSD card for the ol’ 2010 MacBook.
The Affinity Design program is very good though and an great alternative to Adobe for those who pay the monthly fee.